I googled the word crisis looking for a definition, here are the first three that appeared.

The first one: a time of intense difficulty or danger.

The second one: a time when an important decision must be made.

The third one: The turning point of a disease when an important change takes place, indicating either recovery or death.

I write this from the comfort of my own home, in a world that tries to overcome a health crisis to go back… outside, to visit friends, family and be able to connect with others, to grieve collectively, to feel a hug. I write from the safety of my home, a privilege I enjoy because I could stay inside, and quarantine, not everyone was able to do that where I come from, in Mexico. Their realities would not allow it, and even when some can stay at home, home is not a safe place to be in for everyone. Violence can be deadly for women and girls confined with their abusers.

I want to write about crisis, about pain, about what makes us uncomfortable, with the hope it allows us to direct our hearts towards healing. What do we need to heal from? The pain I want to focus on here is that which emerges as a consequence of experiencing dehumanization. This experience is produced by the multiple systems of oppression that mark our bodies in different ways: white supremacy, capitalism, racism, patriarchy. All of these are inseparable of coloniality. How to collectively heal from the colonial wound is something I keep asking myself.

I am in the comfort of my current home in Germany, sitting with the unpleasant: pain caused by the inflammation of my body, a consequence of a chronic inflammatory disease. This forces me again and again to literally sit with what usually one tries to avoid: ache and discomfort. The recurring health related crisis my body experiences usually do not fit the third definition of this word. This means, these do not fully resolve, and so far, haven’t caused death either. These are more like cycles and waves that throw me out of balance making everyday tasks incredibly difficult. This personal health crisis comes in a moment of a global health crisis. At first, thoughts of relief: at least being unemployed means that I can take the time to recover without the added stress of having to perform, at least others do not depend on me being able to get out of bed and move, at least I can rely on my partner for care, economic and emotional support. The uncomfortable comes to the surface…numbers say I am one in ten, this means one in ten people with a uterus are living with endometriosis. These are people often feminized, mostly women. Too often having to deal with paid and unpaid work, care work that sustains life in many ways even when devalued and unseen. What kind of society do we need to envision to be able to hold, sustain and provide a life with dignity to those with different body abilities? Whose bodies are perceived as disposable through dominant colonial logics-gaze? We are unable to be productive in the ways required by neoliberal capitalism even in non-pandemic times.

Having experienced the constant devaluation and dehumanization by the medical gaze dismembering this body and reducing it to a machine, I prefer to tell stories in a way that allows to weave my humanity against the cold detached and often useful data provided in the form of statistics and numbers. Useful to give a panorama of a situation, harmful in reducing a person’s life/pain/history to a number. What makes me uncomfortable? Knowing there are so many who do not have the privilege of accessing health care when needed. The fact that healing continues to be dominantly institutionalized and structured under modern-logics and notions of body and health, disregarding everything that does not fit these ontologies of oppression. Knowing racialized-feminized bodies are subjects of other forms of violence inseparable from the othering gaze that is also the medical gaze. This gaze comes from structural privilege that has shaped the ways in which peoples are perceived, the unconscious bias everyone inherits by the mere act of growing up in a racist and sexist society. How to heal the unacknowledged?

I am drinking agua de Jamaica (cold hibiscus tea) with no sugar, my mom used to make this at home. That home is faraway. I am drinking this because it tastes like home and I know it is good against bacteria. I also know that hibiscus comes from Africa, a continent that feels so distant until one acknowledges the painful shared history of colonization and trade of enslaved black peoples, goods and spices. This is what connects us across oceans. The biggest market during the period of Spanish rule was called El Parián, located at the heart of Mexico City, what is now el Zócalo. Three generations of women in my family worked around this area in the same colonial building that during the time of Spanish rule served as customs to declare all that belonged to the Spanish crown. The market was the point of encounter where people could have access to what was brought from the colonies in Asia (e.g. the Philippines) and from Europe. We can taste, smell, drink our history. I do not add sugar to my hibiscus drink, sugar is an inflammatory food, it makes my body sick. Sugar is tied to the history of slavery of black and indigenous peoples in sugarcane plantations in colonized territories in the Americas. I wonder if this is why my body reacts so intensely to the sweet taste born out of cruelty. Many have argued about the racialization of specific bodies as necessary for capitalist exploitation. This is what coloniality points to while allowing to grasp the logics that allows it, and the denial of such dehumanization that still holds structural racism in place. How do we heal from the pain caused by the historical violence that has meant the destruction of black peoples’ bodies, and the dispossession of indigenous peoples’ territories and knowledges? Last night, I read a Mayan healer was burned alive accused of witchcraft in Guatemala, his name was Domingo Choc. Five hundred years after colonization indigenous knowledges are still devalued and this violence has been necessary in the destruction of those who embody these knowledges, like Domingo. Understanding knowledge as that which only originates in western modern logics is another way in which racism manifests, it is vicious and has concrete atrocious consequences on racialized peoples.

As I am bed bound these days, I cannot help but wonder what I will do when this endometriosis crisis happens again, and I have a full-time job. Realizing I first need to be fluent in another language, German. Perhaps I am not close to getting that hypothetical job… I know how stressful and exhausting it is to seek medical attention where one is racialized, and translations are required. It makes me feel like an alien. A few months ago, I was given a preoperatory sheet with a standard drawing of a white male model, used to locate the area where I would have the surgical procedure. How can one not be aware of not belonging? Of not being the norm in such a context? These questions are also part of a crisis, an existential one that led to a creative project tilted the Book of Crisis.

Where what became evident was the struggle around being a migrant, a woman of color and the alienation of this experience accentuated, but not caused by a health crisis the world is facing. How our bodies are impacted by this crisis? What does the world we want to live in look like? I try to look into my story, and the stories of the women that made my existence possible for clues…We need an act of radical imagination to change the current violent realities around us. To make healing a path of action that seeks to dismantle the systems of oppression responsible for causing this collective wound. The one we experience when we are so constantly, violently, and historically dehumanized. 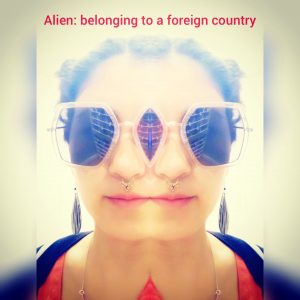 I am a healer, artist, writer, yogi and Mexican food lover. I have a PhD on development studies from the International Institute of Social Studies (ISS) part of Erasmus University Rotterdam. My work is on the politics of knowledge.  My research focuses on forms of resistance to the violence of coloniality, particularly to epistemicide (erasure of ways knowing-being) and feminicide (erasure of racialized-gendered-feminized bodies) looking at how these intertwine.  My art and research projects bring together feminisms, the colonial wound, healing, the body, spirituality and politics. I write about decoloniality in my blog decolonize and about healing from a feminist lens in my blog in Spanish La Catártica. I collaborate in the collectively self-managed publishing house Cooperativa Editorial Retos bringing free publications by indigenous, afro, trans, lesbian, rebellious women of color. Reach me at paulina.mendez[at]posteo.de  and on Twitter @PaulinaRebeldía