Some brief remarks from the editors, Rosalba Icaza and Zuleika Sheik

When we spoke of breath in our introduction to this series, on how oppression takes the breath away, we could not imagine that a few weeks later our worlds would reel from the death of George Floyd, which brought into the mainstream the deaths of countless other black bodies across the Global South at the hands of law enforcement. To us the link between the state carceral system and the lockdown and its exacting of violence on black bodies is explicit. It cannot be ignored. For this week’s feature, we offered this space to the ISS Black Community, based at the International Institute of Social Studies, Erasmus University Rotterdam, who wrote a Message of Solidarity to the Black Lives Matter movement and that was featured on ISS website. We are grateful to ISS Black Community as they granted us permission to reproduce it in full here.

by the ISS Black Community

Day by day I keep asking this question as reasons fly out the window when I see the monstrosity perpetrated against each other. Today it is racism, tomorrow it is gender inequality, ethnicity bias, religious conflict, everyday it’s a constant struggle over one divide or the other.

Now, we live in constant fear of the people around us not knowing who will snap next and reveal a side we never believed existed. It’s sad to teach our young kids the rudiments of survival as a black kid robbing them of the innocence of just being a child. Why should we apologize or made to feel bad for being born the way we are? Why does skin color matter?

Even though the message has been song a million times, we will not stop singing this mantra!!! Yes, all lives matter but BLACK LIVES MATTER!!! Stop killing us. 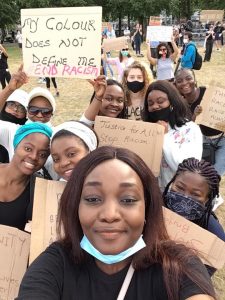 It’s time we unlearn the myths and echoes of colonization which has driven us here. The dictates of who belongs and who doesn’t, end the segregation in race, gender, religion, ethnicity and all the divide…it is tearing us apart. If we are stripped of all the privileges and titles, all that will be left is our humanity. We were first humans before anything. The way we produce knowledge needs to change. The new knowledge should be VALUE AND RESPECT FOR ONE ANOTHER. HUMANITY FIRST. Let us give our future a better chance to actually live without these fears. LET’S END RACISM, GENDER INEQUALITIES, LET’S END IT NOW. As Frantz Fanon said, “WE PROTEST, BECAUSE WE CAN NO LONGER BREATHE”.

Stupidity is when you define a human being by his or her colour. End the callous killings of Black people without impunity now!!

If all you see when you look at me is “black”…see a doctor brother, you are humanity blind!

We cannot continue to live in a world where self-defence is the acceptable mantra for attackers and being “black” the crime of the attacked.

We complain about the biological viruses that bedevil the human race, but forget the viruses that have captured our conscience, subdued our moral bones, and our sense of humanity?

Check yourself if you trigger hate and think you have the right to take lives and discriminate. Being racist is not an identity, it is a disease…get help!

Who are you to teach hate and claim justification?

The arrogance!
The nerve of you!!

Does it make me less human?

Does it define who I am?

Does it define what I am?

Why am I being oppressed?

Why am I being subjected to human rights abuse?

Why am I being racially profiled?

It is the same blood that runs through my veins

It the same Supreme Being that created us

We live in the same world

With heaviness of heart, we mourn the unjustifiable, callous and malicious murder of George Floyd, at the hands of a US police officer, whose responsibility, it was, to protect lives. We are deeply saddened by the consistent spectacle of state-sanctioned and institutionalised racism meted out to fellow Black people in America and other parts of the world. Our thoughts go out to the families of George Floyd as well as other families who have been affected by these murders and other violent expressions of racism.

We stand in solidarity with all Black people and People of Colour who experience the different forms of racism and use this opportunity to demand that justice is served and perpetrators brought to book. Violence in one place, is violence everywhere. These murders and acts of brutality steeped in racism are a constant and disquieting reminder to us all of the racism canker we live with in our schools, workplaces, social spaces, government, etc. These irrational bigoted murders are a reminder of the constant fear of racist acts of impunity that Black people have to live with. We need to acknowledge racism to be able to address racism. We state with no doubt whatsoever, that as Black international students, these issues deeply resonate with us. We have and continue to encounter various forms of symptomatic racism and racial profiling – institutionalized and individual – this has got to end.

This is a monumental period in the history of the world and in the fight for human rights and dignity for all and all countries must work to bring an end to the discriminatory state-sanctioned violence and continued dehumanization of Black bodies. We believe in the power of protests and activism and we recognize that the fight for the equality of freedom of all people in the world requires complementary efforts. We call on the government of the Netherlands and in other countries, educational institutions, corporate bodies as well as individuals to challenge the systematic and fundamental inequalities and the machines that keep them thriving. Racism in any form is dehumanizing and we are reminded of the works of Dr. Martin Luther King who prompts us that ““injustice anywhere is a threat to justice everywhere”. We believe it will take concerted individual as well as institutional efforts to kick this canker out of our societies. We owe a responsibility to ourselves and to posterity to fix the systemic racial injustice around us.

Our humanity must remain paramount. In a racist society, it is not enough to be non-racist, we must be antiracist. We call on all persons to purposefully identify, discuss and address the issues of racism around us. We need to collectively stand against racism and all forms of racial prejudice and racial injustice. We call on all persons and institutions to recognize racism as a social and political problem and to treat it with the utmost practical alacrity of concern it requires in schools, workplaces, social spaces, etc. 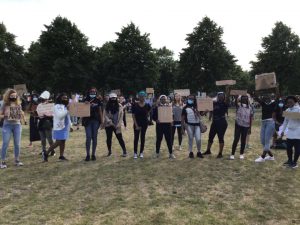