In “On Being Truly Educated” (2015) Noam Chomsky argues that “it is not important what we cover in the class, but what we discover in the class to be truly educated”. Etymologically, the word ‘education’ has originated from the Latin word ‘educare’, which can be interpreted as ‘to bring up’, ‘to rear’, and ‘to lead’. In other words, one of the major purposes of education is to nurture and create able leaders in a society, who would be able to contribute holistically, de-hierarchically, and diversely towards sustainability of life. But, as we look into the general scenario of education systems across the globe we see a highly contradictory and disappointing picture. 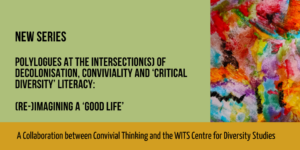 Mostly, the intention behind ‘education’ as a phenomenon and ‘educating’ as an exercise, has become a crucial tool for various western/colonial forces of capitalism to manufacture various epistemological and ontological boxes of knowledge binaries that carefully safeguard the western/colonial metaphysical empires and successfully spread violence and hatred in the forms of racism, Islamophobia, patriarchal heteronormativity, etc. in the contemporary era. These formats of violence are manufactured, documented, and archived in various forms – pedagogical structures, syllabuses, textbooks, research articles, dictionaries, and audio-visuals. The boxes have given birth to a set of ‘one-size-fits-all’ parameters of learning and sharing knowledges, which benefits a certain group of ethically, morally, and economically privileged people in a society and undermines the knowledge systems of the ‘others’. Such practices of inclusivity and exclusivity have transmuted education from a system of collective ‘knowledge dissemination’ toward a self-centered capitalistic mode of ‘knowledge production’.

With respect to the aspect of ‘knowledge production’ in a western/colonial capitalist world, Achille Mbembe, in his article “Decolonizing Knowledge and the Question of Archive” (2018) observes that “every human being becomes a market actor; every field of activity is seen as a market; every entity (whether public or private, whether person, business, state or corporation) is governed as a firm; people themselves are cast as human capital and are subjected as market metrics (ratings, rankings) and their value is determined speculatively in a futures market” (4). The capitalization and marketization of the knowledge systems are pushing individuals into suffocating compartments of ‘bad faith’. The experience of bad faith provokes individuals to build realms of chauvinism and pseudo-intellectuality in which one’s perspectives of knowledges are regarded as superior and the ‘rest’ are regarded as inferior. The impact of marketization and bad faith can be seen through the violent pedagogical attitudes of many teachers who dislike being questioned, challenged, and counter-argued by students in the class; by creating hierarchical classroom environments in which certain students are ‘allowed’ to engage in discussions in the classroom and certain students are ‘not allowed’ to do so; through projecting certain fields of study as socio-culturally more contextual and economically more valuable than others (usually the academic fields of science and commerce are projected as superior to the field of arts); through promoting certain syllabus structures of certain universities as epistemically and ontologically ‘authentic’ and certain syllabus structures as ‘inauthentic’; through developing universalized patterns of learning and undermining individualistic ways of learning and sharing knowledges, etc.

So, to counter-resist these habitual challenges that individuals encounter in the process of learning and sharing diverse constellations of knowledges across the globe, the following section makes an effort to investigate the roots of various pedagogical, epistemological and ontological issues through selectively analyzing certain terminologies that function in a highly colonial-authoritarian-capitalistic manner.

Mapping the Shift in fragments and fractures

So, how can we generate systematic and structural counter-resistance to dismantle the systemic functioning of the established above-mentioned aspects of epistemological, ontological, and hermeneutical violence? Amongst multitudinous possibilities, one possibility could be to develop liminagraphical spaces of “relationality, reciprocity, accountability and coalition” and those liminagraphical spaces could be curated through the radical, non-linear, and often non-disciplinary paradigms of post-development, critical diversity literacy, conviviality, stupidity, common sense, and many others. Due to the paucity of space and the necessity of continuity I am not going to discuss these paradigms in detail here. But, to give the readers the necessary context of my arguments in this article, I would briefly share the paradigms in a fragmented and fractured manner. Some of the possible paradigms are:

The way of defining these paradigms in a fragmented, fractured, and interrogative manner reflects my porous, fluid, and oscillatory positionality in acknowledging and trying to apply them in my daily life. In the process of shifting the grammar of colonial/western pedagogies, as I grapple with these radical paradigms I always encounter multiple levels of anger that are positioned in the past, present, and future. The attempt to define these paradigms through a set of fragmented questions also unpacks my confused state of epistemological and ontological ‘inbetweenness’ which I wholeheartedly embrace in my works. As, for the time being, I embrace my state of confusion as a conclusion in this article, I also briefly pause to collectively self-reflect on these counter-colonial paradigms and navigate ways to apply these paradigms as critically and diversely as possible in the present and the future.

Sayan Dey grew up in Kolkata, West Bengal and is currently working as a Postdoctoral Fellow at Wits Centre for Diversity Studies, University of Witwatersrand. His recent work includes publications such as History and Myth: Postcolonial Dimensions (Vernon Press, 2020), Myths, Histories and Decolonial Interventions: A Planetary Resistance (Routledge, 2022), and Green Academia: Towards Eco-friendly Education Systems (Routledge, 2022). His areas of research interests are postcolonial studies, decolonial studies, critical race studies, food humanities and critical diversity literacy. Sayan is part of the Convivial Thinking editorial Collective. He can also be reached at: www.sayandey.com.